We are, all of us, Found Objects to be picked up and reassembled throughout our lives.  Luxury of a Load-bearing Weight is an omnibus with Found Objects being chapters in the visual storytelling.  The narrative speaks to my own story and in turn, relates it to the greater human effort.  It is a hope and gratefulness for shouldering a burden successfully.  It is both personal story and interconnectedness of the human dimension.  It is dichotomy and metaphor, connecting the contemporary to the traditional, modern, fine art to craft histories through material and method.
‍
Similar to a painter mixing their own colors, I am a sculptor building my own materials for re-assemblage.  The first stage of these works is with watercolor on paper.  Here, I am focusing on solidity and the wholeness of shape in oval-like forms; emphasizing layers of color as patina. (the whole being)
In the second stage, these forms on paper are split; divided as an exploration of non-attachment to the preciousness of our own creations.  While drying, the watercolor presents it own marks and patterns that I follow as a map aiding me in knowing where to make the descriptive cuts. (the trauma of physical division)
Third stage is in the recombining of these separate forms.Through the use thread, embroidery floss and yarn, stitching I reattach the divided paper elements; adding another layer to the work’s story through threadwork and bringing completion to a piece. (the meditative process of reconnection and healing)
‍
Found Objects are chapters in my story and act as prayer and metaphor in my studio vision for seeing through to the joys in life while recognizing struggle. 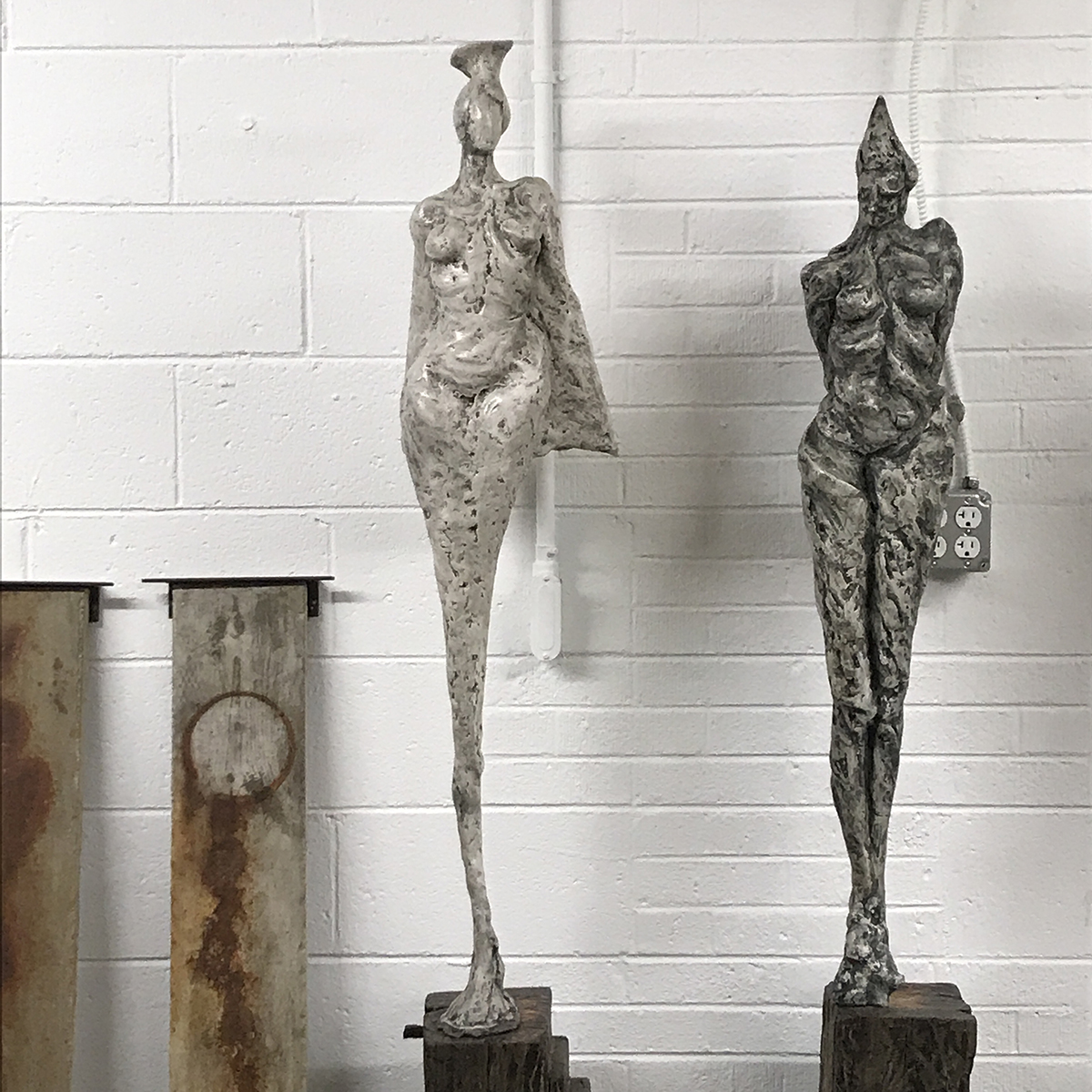 Molly Sawyer is an abstract artist born and raised in Atlanta, Georgia.  At the age of 10 years, she was diagnosed with a brain tumor which has affected her life’s work from the earliest stages.  She holds a degree in ceramics from Guilford College in Greensboro, NC and attended The New York Studio School and The Art Students League of New York where she focused on figure sculpture.  She learned mold making and casting techniques during this time while simultaneously studying the horse in her own studio in Manhattan.  This interest was sparked by the horse drawn carriages that passed her apartment throughout the day on their way to Central Park.
‍
Sawyer’s work took an abstract turn after a diagnosis of breast cancer in 2009.  After numerous years of treatment, she relocated to Asheville, NC where she began experimenting with natural materials such as rust, Spanish moss, lichen, and raw animal fleece.  She would allow these organics to literally decompose in order to explore the concepts of entropy and the life cycle.  As her life experiences shift, so do Sawyer’s choice of materials.  She now includes in her sculptural work processed fiber as it redirects her narrative from end of lifecycle to longevity and strength.
‍
2019 moved Sawyer into an unknown area both physically and materially as she was driven to navigate the next change in her medium, shifting into works on paper to coincide with additional medical challenges.  An exploration of patina, visual texture and color through watercolor has been the result.  Her abstract forms began with inspiration from stone and lichen along the west coast of Ireland.  Ovalesk forms are filled with layers of color and activity.  The wholeness of these forms is sacrificed as Sawyer divides the forms and rejoins them by threadwork and embroidery, creating reassembled, collagelike constructions.
‍
Through a broad net of inspirational figures, Sawyer works to maintain balance in her studio practice.  While she finds affinity with visual artists such as Eva Hesse, Louis Bourgeois, Magdalena Abakanowicz, Henry Moore, Ismau Noguchi, Constantin Brancusi, William Tucker, and Sheila Hicks, Anni and Josef Albers she finds momentum in learning about the lives and works of artists of disciplines other than her own.  Her influences include those whom she considers experts in their field of creative expression: musicians, actors, chefs.  But Sawyer extends her list to the doctors and surgeons who have been instrumental throughout her life.  With these heroes in mind, Sawyer’s work is guided by the search for balance while her medical experiences inform the work ongoing.
‍
Sawyer shows her work regularly in both Solo and Group exhibits.  Among these are Asheville Art Museum, CAM Raleigh, Western North Carolina University, Gertrude Herbert Institute of Art, North Greenville University, as well as in New York, New Jersey, Georgia, and Virginia.  The National Sculpture Society in New York City awarded her the Beverly Hoyt Robertson Award.  She has appeared in numerous speaking engagements as Visiting Artist and has attended art residencies in Connecticut, Wyoming, and Ireland.
‍
Molly Sawyer’s work can be found in collections both private and corporate throughout the United States.  She is included in Mandarin Hotel New York, Ritz Carlton Boston, AC Hotel MidTown Atlanta, and Mohegan Sun Casino. Sawyer’s maintains a studio in Asheville, NC where her practice encompasses both sculpture and works on paper.  She is represented by Mars Landing Gallery in Mars Hill, NC and her work can be found at Marquee in Asheville, NC and The Centerpiece Gallery in Raleigh, NC.